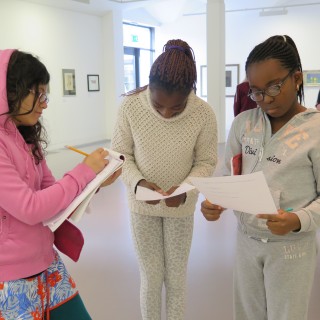 We go to exhibitions and meet with other artists outside of our school studio as often as we can.

Amanda Coogan is a performance artist. We visited her exhibition and made a video log about it too. This performance art was very slow, humans don't normally move or behave like that. I remember all the artists really clearly. Amanda was in a red dress holding lots of mirrors, and walking backwards while looking in the mirrors.  The light was reflecting from the mirrors onto the ceiling, it was cool. There was another artist in a bright yellow dress washing material and surrounded by other yellow dresses. There was a pink haired artist with a blue face mask, standing on a platform, it looked like a mountain. One artist was wearing heavy coats, well it looked heavy because she was struggling to walk with them on. She had a blue tongue and was drooling a blue liquid. The space was huge and felt like another world, we didn't want to leave. We stayed for hours and we weren't supposed to!

Our Artist Anne exhibited work at The Lexicon

We went to The Lexicon to see and support Anne's work. Her work was shown with other artists work at a big exhibition called Lines of Negotiation. We saw Anne making the large charcoal drawing and rock sculpture in our studio weeks before. We were surprised and happy when we saw them in the exhibition, they looked so good beside the other work. They were beside work by another artist Diana, she made a mountain out of net! There was a video playing at the back of the gallery on the wall. It showed a waterfall moving, so we put paper on the wall and tried to sketch the lines of the waterfall. It was hard to do but fun. There was lots to see, and we were amazed.

Hi , I'm Liam and I'm Aizah  and were going to tell you about our trip to see Katherine Nolan's brilliant work at an old fire station turned into an art exhibition space called the MART. The building was old and set an amazing tone for the artwork. We saw some beautiful dresses made from interesting but weird and old fabric. It felt like we had gone back in time.

After we had browsed the objects for a while we moved on and went to see Katherine Nolan's photographs.  Katherine was in her photographs and she was in a house.We were told that it was the house she grew up in.  She was crawling on a table in a dinning room in one. We could see the kitchen in the background and a really old fridge. It looked like she was reaching out to us.  She looked completely crazed and slightly deranged, but  in her own beautiful way.  She had lived away for years and had just come back home to Ireland, so she was trying to connect with her old life and it was confusing and difficult.

We saw her video work too.  She was performing in different places around Ireland such as the Phoenix Park and the Cliffs of Moher.   In one video she had headphones on and was singing at the top of her lungs, in public, but didn't seem to care that people were passing by and it sounded terrible.  She looked like she needed help, and we were just watching her reaching out.  It was a great experience and the first time we ever saw video art. We realised one main thing: Art is not only about paint, canvases, pencil and paper!